Get Grumbleshanks! - With hopes of being reinstated back into the FBI, an undisciplined, incompetent man teams up with an agent and a shit-stained rabbit to track down and capture the highly elusive, hypoallergenic, half Bigfoot, half poodle known as Grumbleshanks before a pair of middle-aged assassins do.
Coming Soon
My Right-Hand Man - A young man's attempt to conquer his social anxiety disorder is put to the test when he wakes up to find his anxiety puppet is now stuck to his hand and inhabited by the spirit of a bitter open mic comedian.
Click here to Read
Johnny Trombone and the One Legged Joy Boy - In order to resurrect his once promising jazz trombone career, Johnny, an undisciplined short order cook, sidesteps his work and family responsibilities when he enlists the Joy Boy, an unreliable, one legged dishwasher to help make it come to fruition.
Click here to read

Graceland North (full-length) - Nick Dooley's life revolves around the long running, hit television show called, “The Time Road Trucker”. He strikes gold when he and his wife purchase the iconic Victorian house where they filmed the first three seasons. Nick's plan of turning the house into a money making tourist destination is put into motion.
But, when the star of the series is accused of lewd and inappropriate behavior, Nick's life spirals downward and ultimately, he must choose between his obsession or to save his marriage.
Request to Read


EXT. DUPLEX HOUSE - ESTABLISHING - DAY
A magnificent lawn and bevy of flowers, shrubs and trees tastefully surround the house.
INT. LIVING ROOM - DAY
The sun shines through the picture window onto the modern decor and stylish surroundings one finds in your typical sterile habitat of an average run of the mill human suburbanite.
An old Mexican woman tends to a FERN and CACTUS that sit on a table in front of the large picture window. She finishes and exits. A few seconds pass. The cactus lights a cigarette.
CACTUS
(takes a long drag)
I thought she’d never leave.
FERN
You shouldn’t do that.
CACTUS
Why not?
FERN
Smoke. It’s dangerous. We’re easily flammable.
CACTUS
Relax, kid. We just got misted. 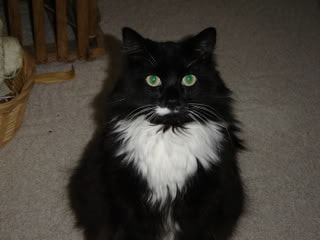 If Indoor Cats Wrote Prose…
by Bambino
I don't remember much after the strange trip to the outside world. My humans lured me into a cage and kept me there for some time. I'm not sure how long exactly, but pretty long. Inside the cage was a small amount of food and a couple of treats that I'm an absolute sucker for. After all, I love to eat. The outside world has a certain smell and feel to it. Several hundred different aromas all combined to form one distinctive smell. Also, I noticed the noise of many. Many things I don't understand, many things I don't want to understand. Needless to say, it was good getting out of the house. Something inside me wanted to break out of this confinement and run. Run wild and chew on the things that surrounded me.
Next, I was put into a more giant cage. It wasn't really a cage at all but more like a miniature house. The scent inside was that of the place I live in. I peed the moment the tiny house moved. It was a feeling I've never experienced before. I peed again before I got used to it. After a while, I began to enjoy it.
The house on wheels stopped, and once again, I felt and breathed in the outside world. It was thick and sickly. I could also smell the scent of beings that I felt wanted to hurt me. I peed once again.
I was carried into another house. The scent that I smelled outside was in here. It both scared and exhilarated me. I could make out sounds that I understood and sounds that I've never heard before. Those I felt the most threatened by. However, the sounds I understood were soothing voices, voices of my kind. They were telling me, "It's going to be okay," and "So far so good, they feed us, and they're nice." Then I was brought into a white room. That's all I remember.
Now, I'm out of my cage and lying on the soft cushion by the wooden frame that looks into the outside world. My paws ache. I want to scratch something, but somehow I have no desire. I fall back asleep.